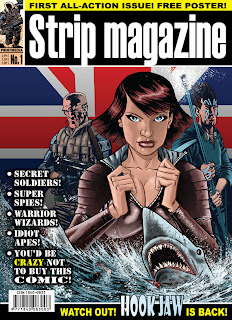 We're delighted to report that STRIP Magazine has been nominated for an Eagle Award, joining 2000AD and CLiNT vying for your vote in the Favourite British Comic Book category.

The final round of voting is now underway, so now’s the time to head on over to www.eagleawards.co.uk and place your vote.

We're thrilled to have been nominated after just three issues! Thanks to everyone who nominated us.

Introduced in 1976, the Eagles are the comics industry’s best-known fan-selected awards, giving the entire comics community the opportunity to vote for the finest publications and brightest talent of the past year, with categories covering the whole world of comics, including manga, movies and web comics.

The awards will be presented at the MCM London Comic Con on Friday 25th May.

“We have seen the greatest response to the awards in recent years, with the industry's diversity reflected in the wide range of nominees,” commented Eagle Awards chair Cassandra Conroy.

• To vote, go to www.eagleawards.co.uk

• To buy tickets to the MCM London Comic Con at Excel London on 26-28 May, please visit: https://www.mcmexpostore.com/store/