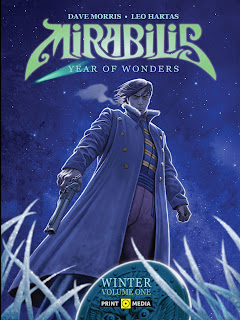 There's a green comet in the sky and things are getting strange. Every day, fantasy and reality are getting harder to tell apart. Witches in bottles, warmongering cabbages from the planet Pluto, and a pteranodon roosting on the Eiffel Tower. Or is it a pterodactyl?

Jack Ember is caught between two very unreliable mentors. Talisin is a two-thousand year old wizard or an escaped madman - or possibly both. The Kind Gentleman is the sort of fairy godfather who'll grant you three wishes you can't refuse. Both of them have plans for Jack, who's spent his life dreaming of adventure and now is about to get rather more of it than he bargained for.

Mirabilis is an epic full-colour graphic novel drawn from the pages of Random House's weekly comic The DFC. A delightful fantasy adventure for all ages from 10 years and up.

"My continuing love for Mirabilis just grows and grows. I'm really looking forward to the collection that is definitely coming out at some point in the future."

"The characters and events are believable, easy to understand and the script has a nice flow that is easy to read and lures you into it. There’s a nice narrative/storytelling feel to the script, almost musical.
"The art by Hartas fits the story. The linework is smooth, not cluttered. The backgrounds are nicely detailed, not overpowering."

"The inaugural instalment in Dave Morris and Leo Hartas's lavish turn-of-the-20th-century fantasy... ends all rather abruptly with an audacious cliffhanger that will leave you desperate to find out what happens next. So let's hope that we aren't kept waiting too long for the second book."
-- Stepehn Jewell, SFX

"Not only is Mirabilis an involving adventure story that moves along at a good pace, it's also full of mystery and mild horror, with a strange dreamlike intrigue throughout. Mirabilis is grounded in solid storytelling and, although an all-ages book, is more mature than the shock-value dramatics of comics such as Clint. If classic titles such as Valiant and Lion were being published today and had evolved to accommodate modern storytelling techniques, Mirabilis is the sort of strip that would be ideal for them. As it is, you get better than that, because instead of a serial story you get a whole book to sink your teeth into."

-- Lew Stringer, Blimey, It's Another Blog About Comics

HOW TO BUY MIRABILIS

HOW COMIC SHOPS CAN ORDER COPIES