Print edition of STRIP Issue 2 on way at last 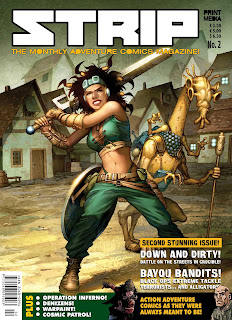 We'd like to put it down to sabotage by Enemy Apes and dimensional rifts, but the delay to getting the print edition of STRIP: The Adventure Comics Magazine Issue 2 into newsagents has been down to far more mundane (but probably more complex) reasons.

But, at last, our distributors have confirmed receipt of the Magazine from our UK printers and they are aiming for it to be on sale from Wednesday 31st July.

Our printers are also in the process of dispatching subscription copies.

(No, we can't quite believe it, either).

Once stock has also reached our UK book warehouse we'll be dispatching copies to Diamond for comic store delivery.

We're very sorry for the delay to the Magazine, and we're going to have to apologize right away for what will now be the early September release date of Issue 3.

Because of costs of distribution and a crinkle in the inner workings of one of our major UK distribution points that would mean releasing Issue 3 in August would cost as much as it would to promote three issues from September onwards, we have decided to delay the release of Issue 3 until the beginning of September.

• The digital version of STRIP is on sale now for iPad and is also available as a PDF download on Scribd.

King Cobra resumes in Issue 3, drawn by Doctor Who Adventures artist John Ross, while further down the line we have an all-new Cobra stories in the works from Wamberto Nicomedes (who drew the Issue 1 opener)!

All your favourites will continue and we have plans for new strips well into 2014 from artists including Bernard Kolle, Marc Olivent and many more. (And yes, those are plans on the basis of getting the title firmly back onto a monthly schedule...)

STRIP IN THE LAKES!

We're pleased to announce that Print Media will have a presence at the Lakes International Comic Art Festival, rubbing shoulders with the likes of Ed Brubaker, Kurt Busiek, David Lloyd, Bryan Talbot, Sean Phillips and many more top comic creators from both sides of the Atlantic (18th-20th October, see www.comicartfestival.com for details).

"Looking from the outside in, we appreciate that after the way STRIP has been knocked sideways, uphill and down dale due to its overseas administration, you must be thinking we're gluttons for punishment by now," says our publisher Ivo Milicevic. "But when you've put as much time and effort into a publication, a project I really believe in, you don't let go easily. I hope you, our readers, won't either.

"Thank you for your comments on Facebook, Twitter (good and bad) about STRIP: The Adventure Comics Magazine. We do read them all. We've taken a lot of them on the chin, too.

"We're now hoping the project plan is firmly grounded in reality for it to continue and we appreciate your support and creative involvement."