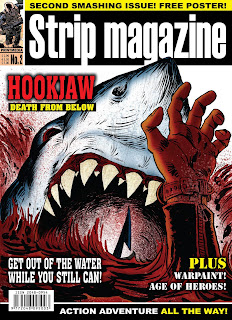 Over on his official blog, ace artist (and major Hookjaw fan) Rufus Dayglo has posted details of how he created the stuning image that graces STRIP Magazine Issue 2, on sale 17th November - which was approved just yesterday by Egmont.

"Recently, John Freeman asked me if I’d be up for drawing the cover for the second issue of the soon to be launched comic book, STRIP Magazine," he exaplains.

"Best of all…. The cover was of Hookjaw, from Action, the 70s most mischievous comic book, and certainly the bloodiest thing to ever see print in mainstream UK Comics!
"Ramon Sola is one of my absolute heroes, and he drew Hookjaw in Action weekly.. so I was very excited about drawing this cover!
"I originally wanted to show the whole of HookJaw," he explains, "and thought I’d try the old 70s technique of putting another panel within his shape… so the Screaming diver is ‘reflected’ in HookJaw’s body… but I thought it looked kinda messy.
"So I tried it with the diver superimposed inside HookJaw’s mouth.. to suggest what was about to happen to him…  but again…  I thought it looked kinda confusing, and was a bit too busy.. no breathing space, so I abandonned that one too! 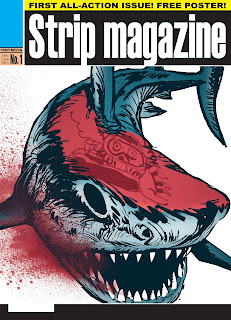 "Eventually, I went for a real 70s comic book approach…. The diver almost reaching the surface, and HookJaw looming over him.  This also meant I could emphasize the ocean, and blood!
"This is probably as close to drawing my childhood comics as I’ll get…  I can’t wait to see it in print!"
Needless to say, we think the cover's absolutely amazing and we're really chuffed Rufus, who's very busy with Tank Girl and more, found the time to draw it.
Issue 2 featuring this cover is on sale 17th November 2011.
Originally written by Ken Armstrong, who now lives in Australia, and drawn by Ramon Sola, Hookjaw is being remastered for STRIP Magazine in sparkling new colour, with no script edits (there will be no Greedo shot first type nonsense!)
• You can see the other stages of this cover's development on Rufus' blog: http://rufusdayglo.blogspot.com/2011/09/death-from-below.html

This online sampler features pages of some of the strips - plus feature spreads from our exclusive interview with artist PJ Holden and our feature on 1970s comic Action - to give you a taster of the new title.

We're also delighted to reveal the first winners of our STRIP Challenge (with more to be announced later) - David and Graham Stoddart, whose Agent Syber features in Issue 1. Pages from this great strip feature in the sampler.

• To order the print magazine, give your UK comic shop this Diamond Previews order code: JUL117915.