STRIP Magazine: The Reviews Are In... 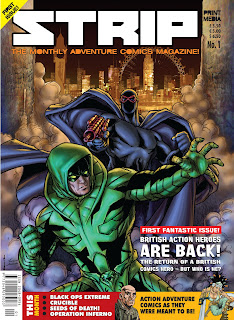 "Strip have a provided an excellent boys comic, which may be able to find a distinct niche in the market."

"The earlier test issues of Strip (exclusively available in comic shops) were a little patchy in places, as if it was finding its feet. A shrewd decision to test the waters before launching properly, this new volume of Strip bursts out of the gates in breathless measure maintaining a consistency, quality and appeal that many other comics would kill for. With strips planned for at least the next twelve months, buckle yourself in for a fun-packed ride."

• Matthew Charlton at The Fiction Stroker

"It gave me the feeling of being young and going to the newsagents for my favourite read. Now that's truly priceless."

"With the news that the first 12 issues are commissioned and planned  out this first issue it couldn’t get any better and if you can find in your newsagents, grab it now as you’ll be hearing a whole lot more about it."

"Strip Magazine is a bold attempt at launching a new comic into a country that has largely given up on them."