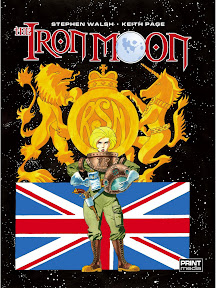 ABOUT THE IRON MOON

The twentieth century is just around the corner and Queen Victoria is hale and hearty as she heads into the second century of her reign. The British Empire stretches from the white cliffs of Dover to the red skies of Mars. Go-getting men and women of the imperial dominions flock to the colours, eager to make reputations and fortunes in the wilds of high space.

Take lieutenant Charlotte Corday, for instance. Born in what used to be known as France, she has risen to prominence through the ranks of the Royal Space Navy and now finds herself up to her neck in her greatest escapade yet. Watch as she travels to the mysterious Iron Moon! Marvel as she grapples with a conspiracy that may see the galaxy plunged into war! Goggle as she meets new and strange races, both mechanical and biological! Ponder how she manages to put away so many cups of tea! And prepare to have your brain scrambled as she scoops us up and carries us to the very limits of this universe... and into the next!

Iron Moon writer Stephen Walsh has written multiple volumes of DC Thomson's Commando Picture Library, as well as the graphic novel The Acid Bath Case (illustrated by Kellie Strom). He co-wrote the feature films How Harry Became A Tree, released in 2001, directed by Goran Paskaljevic and the upcoming Where The Sea Used To Be, directed by Paul Farren. He's currently working on a documentary about John Ford with the director Sé Merry Doyle, as well as preparing further adventures of Charlotte Corday with Keith Page.

Inspired by the great British comics artists of the past such as Frank Hampson, Don Lawrence and Joe Colquhoun, Keith Page has worked full-time in comics and illustration for some 17 years.  Subjects have ranged from television-related material such as Thunderbirds, science fiction, and his current war stories of all periods for Commando. A variety of Keith's work can be seen on www.keithpageukcomocsartist.blogspot.com.

"The 64 page full colour hardback book is a nice large format, bigger than A4, and a classy looking product. The heroine of the story is Charlotte Corday, and if that name sounds familiar it's because she also starred in London Calling last year from Time Bomb Comics. This is the beauty of creator-ownership, that characters can leap between publishers like this.

"There's more to Ms. Corday than that though, as she's a Jerry Cornelius type figure who can appear in completely different times. Where London Calling was set in an alternative 1950s Britain, The Iron Moon is set in the alternative steampunk era of Queen Victoria's reign.


"... Keith Page's artwork here is a joy and a revelation. In recent years his own style has really developed and The Iron Moon is proof of the dedication and hard work he's devoted to his craft. Keith has put an amazing amount of detail into the drawings and the book is a rewarding experience... A refreshing change from all the computer coloured pages usually found in comics these days."

-- Lew Stringer, Blimey! Its Another Blog about Comics
Read the full review

"Writer Stephen Walsh and artist Keith Page were responsible for my favourite graphic novel of 2010, Time Bomb Comics gloriously surreal London Calling (read my review here:  http://comicbuzz.com/london-calling )... "The Iron Moon is set in an alternative, steampunk Victorian era, where the British Empire now stretches from the ‘white cliffs of Dover to the red skies of Mars.’ Corday is a Lieutenant in the Royal Space Navy  and starts the adventure by sitting watching a play alongside a steampunked, space helmeted Duke Of Wellington, some 50 years or so after he would have died had this been the normal world.
"... Keith Page’s imaginative artwork complements and enhances Walsh’s writing. It brings the fantastic and bizarre world to life, no mean feat considering some of the things that the script has asked him to do. That he has done everything asked of him (three armed attack monkey – sorry – couldn’t help myself again) and done it with such style is an achievement that deserves all the plaudits it will get."

" There are plenty of lovely touches to look out for, both in the story itself and as background details in the artwork: famous characters kept alive in steam-powered life-support chairs, a cross-channel railway bridge and marvellously Nemo-esque British spaceships. The art is bright and cheery, supporting the fun and adventure of the tale. That said, there are some traumatic and touching scenes when the British squaddies encounter an implacable foe and the dramatic voice-over constantly hints at things to come."
-- Gareth D. Jones, SF Crowsnest
Read the full review

HOW TO BUY THE IRON MOON

• The Iron Moon is also available from www.amazon.co.uk

HOW COMIC SHOPS CAN ORDER COPIES


• Read an interview with Keith Page on downthetubes.net