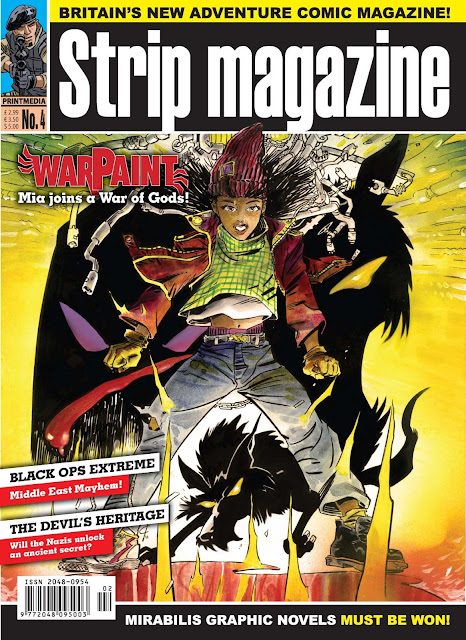 In the latest edition of Print Media Productions monthly action adventure anthology, on sale soon in all good UK comic shops, the war between gods hots up in Warpaint (by Phil Hester and John McCrea), a brand-new Age of Heroes story (by James Hudnall, John Ridgway) begins; and dangerous Nazis trail the love-lorn Constant in The Devil's Heritage (Jerome Felix, Paul Gastine) -- in pursuit of a deadly power that could change the world!

If that isn't enough for you, Black Ops Extreme (John Freeman and PJ Holden) head for the Middle East to sabotage an illegal nuclear bomb factory and we bring you Slayer Keith, a madcap tale of warrior meets mad science in our latest Strip Challenge from David Hailwood, Stu Smith and Dave Thomson!

Meanwhile, Hook Jaw continues to eat his way through greedy oil men and we have some fun for you in Cosmic Patrol and Bogey-Man Bob!

Plus we're more than happy to pay tribute to 2000AD as it reaches its 35th birthday and bring you an all-new interview with Transformers artist and Frontier graphic album creator Andrew Wildman.

The only thing that can stop us is the snow storm that has brought Bosnia to a standstill for the past two weeks - but the magazine's printed and is on its way to Diamond, and your local British comic shop...

We'll confirm the on sale date as soon as possible!