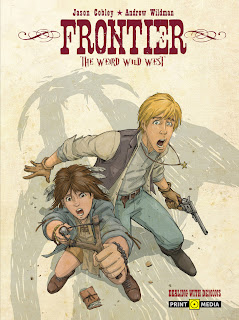 Print Media Productions is pleased to announce the forthcoming publication of Frontier: Dealing with Demons by Jason Cobley and Andrew Wildman.

The Wild West... and Daisy Adams is suddenly all alone, living on the plains, left with her father's old coat and a catapult. Then Mitch Seeker, the son of a sheriff, runs into her life. And they've been running ever since, chasing werewolves, ghosts and demons, on a quest to track down the man who turned them both into orphans and unleashed weirdness into the Wild West.

In 1866, out on the Frontier, things got Weird. History failed to record everything that happened, but Daisy wrote it all down in her diaries. In Frontier, we follow Mitch and Daisy as they seek justice but end up finding more adventure and danger than they counted on. It's weird. It's wild. It happened out west!

First published in the acclaimed Random House weekly comic The DFC, Print Media Productions is delighted to bring you this collection of Britain's weirdest western comic – Frontier: Dealing with Demons. Weaving an engaging, adventure-filled tale of derring-do in the American West, this collected edition of Frontier from Jason Cobley and Andrew Wildman includes additional feature material, including pages from Daisy's secret diary and reveals just how the story was created.

Frontier – now being considered as a possible TV series with a trailer shot earlier this year – will appeal to anyone who's ever enjoyed a cowboy film or comic, but has an added fantasy element that will draw in plenty more readers. With great characters, werewolves, ancient gods and demons and a bad guy that bullets can't kill, there's plenty to enjoy.

Writer Jason Cobley has adapted Dracula, Frankenstein and An Inspector Calls as graphic novels, working with artists Staz Johnson, Declan Shalvey and Will Volley to bring the classics to new life. As well as working as a teacher for almost two decades, he has written the adventures of Captain Winston Bulldog for almost as long, with a variety of UK comic artists including Neill Cameron, most notably in the epic Bulldog: Empire. Based in East Anglia, holding back the sea with just a dustbin lid and some twine, Jason is currently working on new projects, including a version of the legend of folk hero Tom Hickathrift with artist Paul Harrison Davies. Jason met Frontier collaborator Andrew Wildman through a shared love for rock band Marillion. Sad, but we all need a hobby.

Andrew Wildman is a designer and illustrator of some 25 years industry experience. His work as an illustrator has been used in advertising and publishing but it is for his work in the field of comics that he is best known, illustrating for books such as Transformers, The X-Men, Spider-Man and Venom. Further work includes character and environment design as well as storyboarding and animated movie production for the Video Games industries on projects such as Wing Commander, The Mummy, Gunlok, Jesse James: Gunfighter, Delta Force, and Dredd v Death.

Andrew was also Head Character Designer for the animated TV shows Legend of The Dragon and Zorro: Generation Z, Production Designer on the children’s animated TV show The Matt Hatter Chronicles which is due to air early 2012 and storyboard artist on the BBC horror series, The Fades, as well as creating a Children’s TV series with Bob the Builder scriptwriter Simon Jowett and developing his own Graphic Novel, Horizon.

Frontier: Dealing with Demons is being handled for bookshops by Gazelle Books and will be listed in the October 2011 Diamond Previews catalogue. 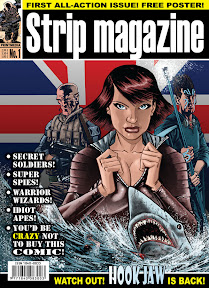 Work is proceeding apace on STRIP Magazine with the strip line up now firmed up for the first issues.

The magazine is on course to launch as planned in October 2011, but as a result of discussions with our news stand distributor we have decided to delay a wide roll out until 2012.

As a result of these discussions, STRIP will launch in UK comic shops only, solicited through Diamond, but we still plan to widen our sales to the UK high street in 2012, effectively 're-launching' the title after its initial tranche of content draws to a close.

Naturally, we expect some potential readers who've been following developments might be disappointed by this news but we actually see it as an opportunity to "test bed" the title, in the a similar way to part works publishers who roll out test magazines in a key region to see if the project appeals.

We will also, of course, be offering subscriptions to the magazine and we're looking at a digital edition - although there are issues about that relating to the use of creator-owned strips that need to be resolved.

(The initial winners for the first three slots have been notified and we'll be advising creators of the next three slots very soon).

We'll also have features on the 1970s comic Action that originally published Hookjaw, written by Moose Harris; and an exclusive interview with PJ Holden by Matt Badham.

The bumper 68-page STRIP Magazine Issue One will cost £2.99 and will come with a free poster, and will be on sale in October.
Posted by John Freeman at 08:28 4 comments 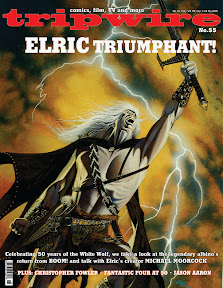 The next print edition of media magazine Tripwire will preview the first episode of Phil Hester and John McCrea's "Warpaint", which will run in STRIP Magazine from Issue 1.

Part of the Magazine's "StripWire" section, you'll be able to read the entire first episode of the creator-owned story which centres on a teenage girl granted supernatural powers in defence of the planet.

Edited by Joel Meadows, a staunch supporter of British comics for many years, Tripwire #55 also features an exclusive Elric cover painted by David Michael Beck, as the magazine celebrate 50 years of the White Wolf with his creator Michael Moorcock and a review BOOM!’s comic - plus, there's an interview with its writer Chris Roberson.

Elsewhere, the magazine commemorates the Fantastic Four’s 50th birthday, and takes a long look at Green Lantern from the Golden Age all the way up to the movie and everything in between.

Also included is an interview with comics creator Jason Aaron of Scalped and Punisher fame, and a chat with London-based author Christopher Fowler and a profileof  movie location scouting company Sarah Eastel.

Walt Simonson's eagerly awaited The Judas Coin hardcover, to be published this Christmas, gets a preview, including a unique sketchbook and pencils and inks section; and Shaenon Garrity writes about the history of webcomics seen from the inside.

Rounding the issue out there are reviews of several of the Eisner-nominated graphic novels and 22 pages of comic strip content in the STRIPWIRE section, which, given its "Warpaint" section, is something STRIP Magazine followers won't want to miss...

• Tripwire #55 Diamond item code is MAY111336. For more information and to check out the digital editions of  Tripwire visit www.tripwire-magazine.com
Posted by John Freeman at 04:55 0 comments