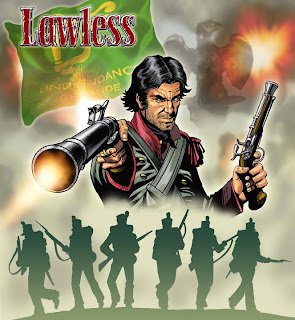 Ace artist Kev Hopgood just sent us this terrific promotional image for action adventure series Lawless, which will feature in STRIP Magazine later in 2011. Ferg Handley is busy with the script for the eight-part first story, set in the Napoleonic Wars.

Lawless tells the incredible story of Jack Lawless and the Irish Legion, a band of renegades and outcasts who fought against against the British in the tumultuous era of the Napoleonic wars.

• For more about Kev Hopgood visit: www.kevhopgood.demon.co.uk
Posted by John Freeman at 10:06 0 comments