Mirabilis artist Bikes It in aid of Cancer charity! 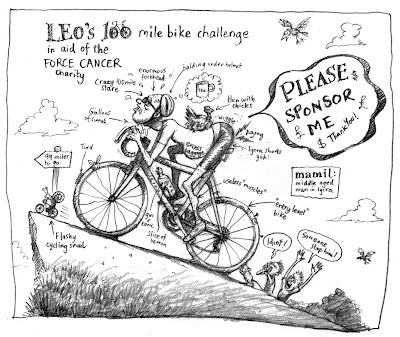 Mirabilis artist Leo Hartas has signed up to do a 100 mile cycle ride in a day in aid of Devon-based chartity Force Cancer.

If you' like to sponsor Leo on line go to Just Giving - http://www.justgiving.com/Leo-Hartas.

"I've had so many donations that my initial target of £100 was whizzed past faster than a tortoise on a race bike," he reveals. "I've now upped the target to £200!

"Thank you so much for your donations, and there's still plenty of time to give to this great charity."

Based in Exeter, the FORCE Cancer Charity has played a vital role in local cancer services for nearly 25 years. It holds the belief that anyone diagnosed with cancer deserves the best possible treatment and professional support close to home.

Their work finances improvements in patient care through research, the purchase of advanced equipment and their Cancer Support and Information Centre located in the grounds of the RD&E Hospital.

• Advance copies of Mirabilis: Year of Wonders Book One are still available now only from First Age Comics, The Assembly Rooms, Lancaster; order it online from the First Age eBay Store

• More about Mirabilis: Year of Wonders on the STRIP Magazine blog

• Learn more at www.mirabilis-yearofwonders.com
Posted by John Freeman at 02:38 0 comments