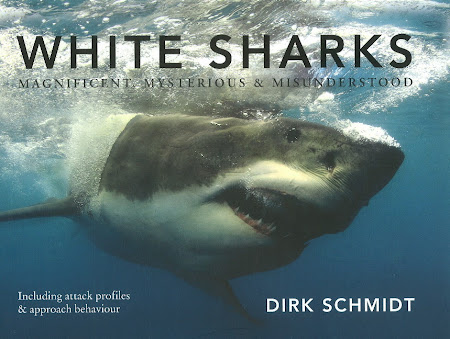 There are few species that strike such fear into humans as the Great White shark as any fan of Hookjaw, which features in STRIP Magazine knows.

And yet this fearsome predator is also greatly threatened by human activity. Moreover, its seemingly random attacks can be shown to follow quite definite and understandable patterns of behaviour.

Based on years of observing and studying Great Whites, White Sharks, a recently-released book by Dirk Schmidt, is a fascinating original contribution towards understanding the behaviour and habits of this much-feared and greatly misunderstood species (not helped by Hookjaw's fictional antics, we're sure!)

Illustrated throughout with magnificent images of White sharks, often in spectacular aerial breaches, this book is essential reading for anyone who is concerned about the health of our marine environment and understanding White shark behaviour. The book is available now from all good bookshops. ISBN: 9781920289508 Price: £28.99

All Change for Black Ops Extreme

Print Media Productions is pleased to announce that artist Stephen Downey has taken up the reins on Black Ops Extreme for STRIP - The Comic Magazine on a regular basis.

Stephen's run on BOX, taking over from PJ Holden (currently busy with Monsterology for Renegade), begins with the first newsstand issue of the title.

Stephen has already drawn two upcoming episodes, both written by new writer Richmond Clements,who has taken over the scripting of the story from John Freeman.

"We're delighted to have Stephen's continuing on Black Ops Extreme," commented editor John. "PJ set a really high standard with his work on the strip, but Stephen's clearly up to the challenge of following in his brush strokes.

"I came up with an overall 'arc' for BOX for the first 12 issues of the magazine, which Richmond is polishing up nicely, but his first two stories are more 'one shots', to draw new readers in as we relaunch the title.

"The 'arc' will resume with the third issue of the newsstand edition, which also sees the arrival of WarWorldz by Iron Moon writer Stephen Walsh and Giancarlo Caracuzzo."

Belfast-based artist and game maker Stephen Downey has worked with Insomnia Publications, Titan Publishing, AAM/Markosia, Heske Horror, Comic a Gael and Beserker to bring his comics and artwork to the masses. He is the co-creator of Cancertown and Slaughterman's Creed, both with Cy Dethan and has worked on the Torchwood comic strip for Titan Magazines.

Most recently, he's been busy with the historical mystery adventure Jennifer Wilde, an original three-part comic book series published by Ireland's Atomic Diner, from a story by Robert Curley and Maura McHugh, with a script by Maura McHugh. Stephen provides art, lettering and covers.