STRIP Magazine rides with the Devil! 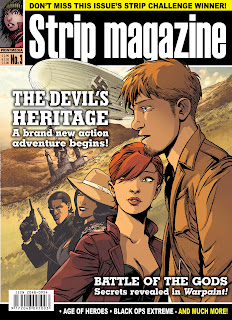 Here's the cover to Issue 3 of STRIP Magazine, on sale in UK comic shops next month.

The Devil's Heritage is a new strip to the title, by Jerome Felix and Paul Gastine. A mystery adventure set in pre-World War 2 France, the art is gorgeous and we think you'll enjoy it.

First published in France by Bamboo, this is our first ongoing story from continental creators.

Also in the issue:

• Can a shark expert put an end to Hook Jaw in our classic strip from Ken Armstrong and Ramon Sola?