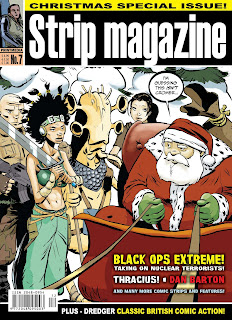 STRIP Magazine #7 should be in UK comic stores tomorrow.

Diamond, our UK distributor, who have confirmed receipt of stock, listed the issue as the Xmas/Christmas special - order code SEP127823 - STRIP MAGAZINE CHRISTMAS 2012 SPECIAL - and confirmed two weeks ago it will be in stores on Wednesday if the stores ordered it.

However, just when we though things were going so well - the issue arriving on time for once! - after a discussion with one comic shop, it seems the email solicitation of the title may have passed some shops by.


Although listed as "sold out" the title is listed on the Forbidden Planet web site, so they seem to be expecting copies: see http://bit.ly/strip-magazine07

Subscription copies of #7 (including a replacement copies of Issue 5/6) were mailed from Bosnia to all subscribers - UK and overseas - on 20th/21st November.