A taste of the STRIP digital edition

Our former editor John Freeman, who is now Managing Editor at our digital partner ROK Comics, has put together this little video for us demonstrating the digital edition of STRIP Magazine Issue 7.

We thought you should see it too and we hope you like it, although we are disappointed we did not see his cat! We imagine it is a ferocious beast from myth.

If you have an iPad you can buy any issue of STRIP from iTunes. 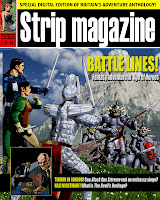