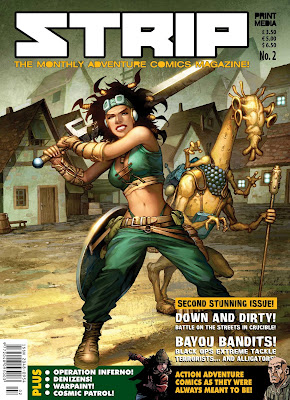 Much later than expected or planned, we can now confirm STRIP: The Adventure Comics Magazine Issue 2 should now be on sale in newsagents from Thursday 20th June 2013.

The delayed publication is the result of a major change to the way STRIP is brought to readers. After innumerable distribution delays that have plagued the title since launch, because of printing in Bosnia, Print Media publisher Ivo Milicevic decided to print and distribute the title in the UK.

Subscription copies are also being handled from the UK.

"The changeover and behind the scenes administration involved in this has taken longer to resolve than expected," he says, "but the change should mean the Magazine will no longer suffer delivery delays and import issues associated with past releases.

"We would like to apologize to our readers who have been kept waiting for Issue 2 for far longer than was expected by anyone involved."

The digital version of STRIP is on sale now for iPad and is also available as a PDF download on Scribd.

• Buy the digital edition of STRIP: The Adventure Comics Magazine from the iTunes store (iPad only)