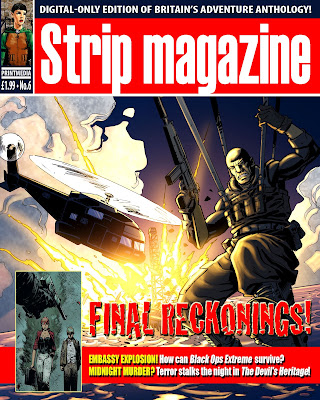 The digital STRIP #6 is now on sale for iPad on the iTunes store, comprising some strips from the print edition of STRIP #5 and some bonus digital only extras, for just £1.99.

And there's some good news, at last, for our print readers – Issue 5 is, finally, in the UK, after a very long wait and several woefully incorrect updates from Print Media Bosnia's previous couriers. 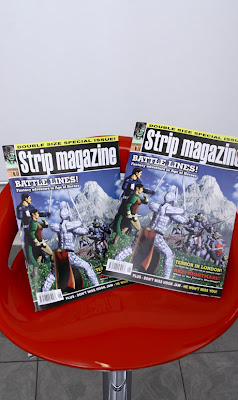 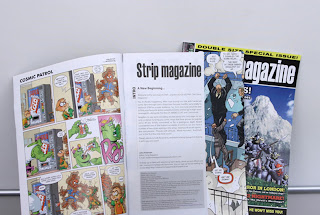 While at this point our new couriers are waiting for the print magazine to clear UK Customs, we're hoping this will be sometime this week and we hope readers will soon enjoy seeing the issue.

Earlier this year, unaware of the problems that would befoul our print magazine, we decided to split the content of the giant-size STRIP #5 roughly in half in order to produce two special digital editions. STRIP Issue 6, published in partnership with ROK Comics, is the second of these, and includes some bonus items that include special promotional pages for a number of British comic creator-owned projects such as RollerGrrls by Gary Erskine.

• In BLACK OPS EXTREME (by John Freeman and PJ Holden) the the do-or-die military team face off with a dangerous terrorist in the middle of an embassy siege!

• Reluctant hero Constant finds himself betrayed in THE DEVIL'S HERITAGE (by Jerome Felix and Paul Gastine)!

• Will an elven warrior find the help she needs in her quest in AGE OF HEROES (James Hudnall and John Ridgway)?

All this plus interviews with comic creators Leo Hartas (artist and co-creator of the stunning "Mirabilis: Year of Wonders") and writer and publisher Jim Alexander (plus some pages from his comic, "Amongst the Stars", drawn by Mike Perkins); a taster for Tim Perkins glorious space fantasy story, "Worlds End"; and more crazy antics from BOGEY-MAN BOB!

All this plus a special taster of two comics from our digital partner, ROK Comics - Team M.OB.I.L.E. and Houdini!