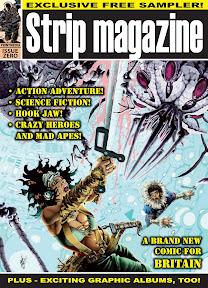 Issue Zero features background on key strips in the new comic magazine such as Black Ops Extreme by John Freeman and PJ Holden, Warpaint by Phil Hester and John McCrea, Age of Heroes by James Hudnall and John Ridgway, Savant by Jim Alexander and Ferrer and Carlos Vila - plus some highlights of the upcoming Print Media Productions graphic album range.

The sampler comes wrapped in a cover by Smuzz, perhaps best known to comics fans for his work on 2000AD's 'ABC Warriors'. The image is taken from his new comic, 'Crucible', which will feature in STRIP Magazine.

There's also a special competition in the Sampler which will offer comic creators the chance to have their work in the title when it launches later in 2011.

Find out more when you pick up your copy at the Bristol Comic Expo!