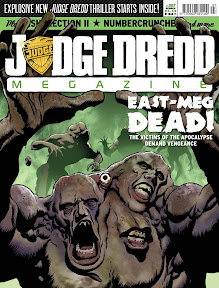 Along with the feature - which includes PJ Holden's superb cover for STRIP Magazine Issue 1 as a full page 'pin up' - Megazine 307 features a new Judge Dredd adventure by John Wagner, drawn by Staz Johnson; and the second episode of Numbercruncher, Simon Spurrier and PJ Holden's intriguing creator-owned tale.

Our thanks to the Megazine team for the coverage.

• Judge Dredd Megazine is on sale now from all god UK newsagents and comic shops. Specific information on the issue at: www.2000adonline.com/vault/megs/307
Posted by John Freeman at 04:04